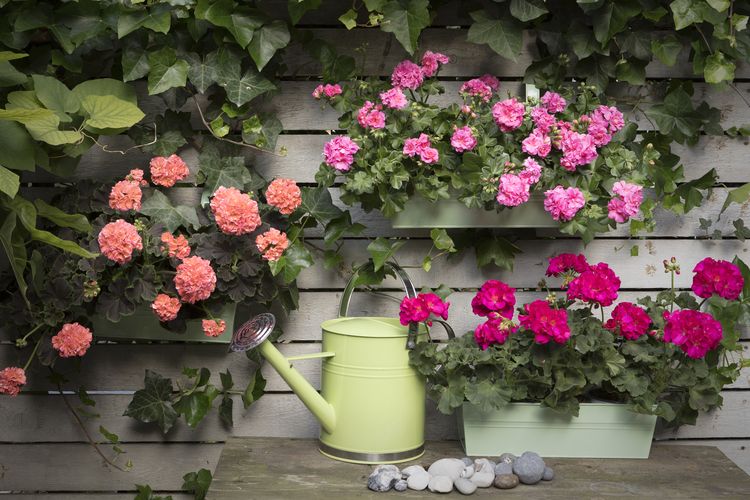 Surprisingly diversifiedThe geranium – a plant with many faces

The geranium – a plant with many faces

The geranium, whose botanical name is actually Pelargonium, is widely known as the beautiful red or white flowers in balcony boxes everywhere. But this plant is much more than that: The geranium is also popular for its impressive diversity of colours, leaves and flower shapes, size and growth forms. The flowers bloom not only in red and white, but also in pink, fuchsia, violet, lavender, apricot, orange and yellow. And they also come in a wide variety of bicolour variants. There are trailing and upright geraniums, both tall and small, scented varieties and those with eye-catching leaf variegations. Additionally, there are cultivars that are a cross between trailing and zonal pelargoniums, the so-called interspecific varieties, and those with particularly large showy flowers, which are well-suited as houseplants. The cultivars which are available in Europe can be divided up into different groups, each of which encompasses numerous varieties. Most of these belong to the zonal or peltatum groups, also known as upright or trailing geraniums. In the past few years, however, the interspecific varieties have become increasingly popular.

The most common type of geranium is the “Pelargonium zonale” or zonal geranium These are upright shrubs with succulent, slightly hairy stems and leaves and numerous small flowers in large, nearly circular umbels. Zonals are available in many types: Some are small and compact while others are bushy, succulent-stemmed varieties, with both single and double flowers and an almost inexhaustible spectrum of colour shades. One characteristic of zonal geraniums is leaves that are marked by a more or less distinctive brown ring. Due to its bountiful blooms, which appear steadily throughout the summer, “Pelargonium zonale” is extremely popular for planting in boxes and planters on balconies and patios, as well as for bedding plants in gardens and parks everywhere.

Contrary to zonal geraniums, the trailing geranium ivy or “Pelargonium peltatum” often has waxy, shiny leaves and somewhat spindly stems. Trailing geraniums are as popular as their upright sisters. Due to their cascading growth pattern with tendrils up to 1.50 metres in length, they spill down from hanging baskets or pots and balcony boxes. While upright geraniums require regular deadheading by hand, the trailing varieties are often “self-cleaning”: Spent flowers simply drop from the stems. This makes them especially well-suited for people who like a showy display of bountiful blooms but without having to spend a lot of time caring for their plants. In terms of colour diversity peltatums are on a par with the zonals and also offer a wide range of forms, from single to double flowers.

The angel geranium or “Pelargonium crispum” is as captivating as the regal geranium with its extremely bountiful blooms and beautiful, bicolour flowers with dark centres. As opposed to her big sister, the angel geranium is an ideal balcony or bedding plant. Despite its smaller size of only 20 to 30 centimetres, due to the wide spectrum of its colours and shapes it is a real trendsetter. Like other geranium varieties the angel geranium likes a cool, sunny spot in the house in winter.

In the past few years the scented-leaf geranium has become increasingly popular. In comparison to the upright or trailing varieties, it has relatively small and less showy blooms. But at the slightest breeze or the lightest touch, its leaves release an intensive aroma. Scented-leaf geraniums can have a number of different aromas, from lilac and rose to peach, lemon and orange to mint, cola, coconut and chocolate. These vary according to the chemical composition of the essential oils produced in the leaves of the plant. In nature these oils serve to protect the plant against pests and parasites. Therefore, when placed on a windowsill, scented geraniums can fend off mosquitoes and other insects. And in the kitchen scented geraniums also find their niche: their leaves and flowers are edible and lend a fine aroma to meat dishes, salads and desserts. When dried along with their leaves they can be used to make a sweet-scented mix for potpourris or sachets. Scented geraniums will grow not only indoors but are just as easy-care as other varieties on a balcony or terrace.

In all their diversity, the cultivars available in Europe give only a tiny insight into the worldwide biodiversity of pelargoniums. To date more than 1,000 varieties and around 280 wild species are registered. In South Africa alone, the home of the pelargonium, over 250 different pelargonium varieties grow.