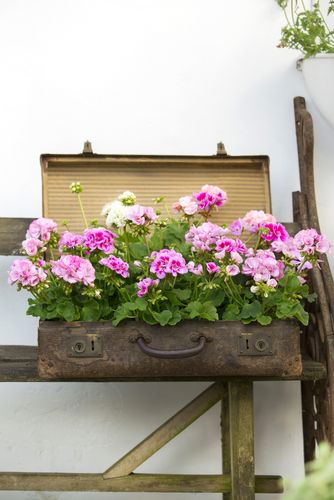 From the Cape of Good Hope around the world

Triumphant advance of the pelargonium

Pelargoniums, more commonly known as geraniums, can be seen everywhere in summer. They adorn balconies, flowerbeds and terraces in Europe and many other countries around the globe. The geranium is not only a symbol of hardiness and beauty for people all over the world, it is also the epitome of homeland feeling. The Swiss have taken this a step further and elected it their country's national plant. And yet this graceful lady is actually an exotic plant in Europe. Pelargonium was originally native to the tropical regions of southern Africa. From the Cape of Good Hope it embarked on its triumphant advance across the globe in the 17th century.

South Africa, the cradle of pelargoniums

More than 250 wild species of pelargoniums can be found in South Africa, some 50 of which grow in the area around Table Mountain. Pelargoniums are also indigenous to Australia, New Zealand, Iran and Iraq, although nowhere are there as many varieties as in South Africa. Many of the wild species have little in common with the growth forms available to us today. For example, some varieties are bushy shrubs attaining heights of up to two metres, while others grow as succulent-stemmed perennials in hot, dry habitats. These plants attain heights of up to one metre and often have thick, fleshy stems that serve as water reservoirs. Generations of indigenous people in South Africa have used pelargoniums for their essential oils in medicines and cosmetics.

From the Cape of Good Hope to Leiden in the Netherlands.

Just when and where the first pelargoniums came to Europe is unknown. There are however reports of a gardener in the court of the English King cultivating a flowering pelargonium in the year 1632. But one thing is certain: In 1672 numerous wild pelargonium species were brought from South Africa to the University of Leiden in the Netherlands. As early as 1652 the Dutch had established a base at the Cape of Good Hope in South Africa, which provided a supply base for ships on the way to the Dutch East India Company. In 1672 Paul Hermann, a German botanist and medical doctor serving on the Dutch ships, took advantage of a brief stop at the Cape of Good Hope to study the plant world around the foothills of Table Mountain. In addition to numerous other flowering plants he discovered pelargoniums there and decided to have several specimens shipped back to the Netherlands. The plants proved to be astonishingly hardy and survived the long voyage unscathed. As a result, by 1686 there were already ten different pelargonium species growing in the botanical gardens of the town of Leiden.

The triumphant advance of the pelargonium

From Leiden the exotic beauties spread to various other botanical gardens in the Netherlands. In the 18th century they could be found in botanical gardens throughout Europe. The nobility and prosperous urbanites discovered these lovely flowers and cultivated them in their gardens and greenhouses. Right from the start, the pelargonium was confused with the geranium. It was not until the end of the 18th century that it was allocated to the botanical genus "Pelargonium". Nevertheless, to this day the correct term Pelargonium has not succeeded in replacing the name geranium. In the 19th century pelargoniums were flourishing all across Europe. This resulted in countless varieties with a range of different colours, growth patterns and leaf shapes. In 1852 the plant had achieved such a high level of recognition that it was even illustrated as a trend flower in German botanical magazine "Gartenflora". At first the pelargonium was predominantly seen in towns and cities. It later became the typical balcony decoration for country cottages after rich urbanites and their servants began taking cuttings with them to their country estates. Incidentally, not only the Dutch were responsible for the success of the pelargonium. British travellers also brought pelargoniums home with them from South Africa to Europe, and in the 18th century breeders in Great Britain had already begun to cross pelargonium species. From the 19th century the breeding of new cultivars continued unabated in other European countries as well. In 1826 the Weimar "Hortus Belvederanus" plant almanac listed 352 geranium varieties and hybrids. Apart from English and Dutch breeders, an especially decisive role in creating the wide range of varieties was played by German breeders. At the same time, in other places the pelargonium was becoming more than just a decorative plant. In the mid-19th century it was a viable economic factor in the south of France and Algeria, where it was cultivated on a grand scale with the goal of using its sweet scent for the perfume industry.

Today the cultivation and production of pelargoniums is a booming global business. A number of new varieties are developed every year. The current pelargonium range encompasses over 500 different types, most of which can be traced back to just a few of the 280 known wild species. In greenhouses in Ethiopia, Kenia, Mexico and Guatemala mother stock plants of modern pelargoniums are propagated in the sunny climate typical of these regions. Every year millions of cuttings are harvested from these stock plants, which are then delivered by plane to the countries where they are further cultivated into market plants in commercial nurseries and garden centres.

Today some 500 million pelargoniums are sold every year in Europe alone. And there seems to be no end to this success story in sight.